Innovation isn't Dead, but Remember to Feed It

In mid-July, I attended a 20-year college reunion of close friends who graduated mostly from Northern Arizona University's Computer Science/Engineering college. We call these, affectionately, "Geek Reunions." We get together about every five years in Flagstaff to reminisce, eat at our favorite college restaurants (Alpine Pizza and Macy's Coffee House, both still open after decades of abuse), and to marvel at the wonders of computer science.

Except that, in twenty years, what do we have? Some cool web-apps (the Internet already existed) like amazon.com and Google Maps. We have the iPhone, and we have [insert your favorite high-tech whatzit here rather than flaming me for forgetting it]. And that's about it. (Okay, to be fair, here are others that I can't imagine living without, though we did alright without them in the 80's: Microwave ovens, cell phones, GPS devices, hybrid engines, LED flashlights, organic produce, PDF documents and ubiquitous e-mail [together negating FAX machines, which were always an insult to human intelligence], flat-screen TVs, sticky-notes, much-improved solar cells...)

I haven't read the book Where's My Jetpack? yet, because I think it could trigger a panic attack. But I heard the author on NPR describe various inventions and leaps of human progress (both far-out and practical) that were predicted to exist, but still don't. Some that I lament: Bullet-trains crisscrossing the nation, Moon Base Alpha, fusion power, a Martian colony, a world-wide food program, world peace, the elimination of cash (or at least those darn noisy/heavy/barbaric coins), ubiquitous personal digital signature authentication (eliminating check-writing, contract-signing, and--sadly--the USPS), solar-power collection farms dotting the nation...

Among the participants at this reunion were at least four previous NAU Association of Computing Machinery student-chapter presidents, including myself. The current NAU ACM President, Leah Shanker (her blog), offered to give us our usual nostalgic tour of the newly remodeled Engineering building on South Campus. We noted, too, that the Business building had undergone remodeling, and was now much taller...blocking the view of the San Francisco Peaks from every vantage point in the EGR building and on the popular grassy "quad" below it. 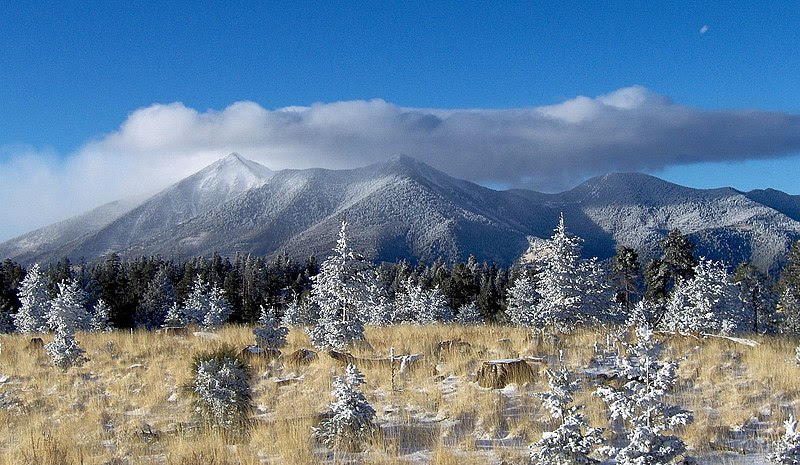 There has always been a friendly rivalry between the Computer Science/Engineering program and the Business College's Computer Information Systems program. But this was an affront to nature! We immediately discussed ways to regain a view of the Peaks: From mirrors to wormholes to particle accelerators to bulldozers...

Where Have All The Nerds Gone?

Apparently the NAU student chapter of the ACM had fallen into obscurity after our network of friends had left. In fact, the whole computer science program had suffered an extreme drop in enrollment.

When I graduated, the artificial bubble known as "Star Wars" or SDI (Strategic Defense Initiative) was just collapsing. Some of us had moved to various cities and signed one-year leases, only to get laid off the next week. (I can't complain. Had I taken a job with Lockheed-Martin or McDonnell-Douglas or Skynet [makers of the T-100], I would likely not be an agile coach now. For me, it was a lesson in turning a bad situation into an opportunity. Of course, it took ten years and 20/20 hindsight...)

For a while (and possibly throughout the dot-COM era?) a CSE degree was not seen as quite as valuable, or as interesting, as a MBA. And, even today, the NAU CSE fourth-year class has only two women enrolled. That's about 1 percent, and far lower than when I was there. Leah is one of the two.

Return of the Nerdi

But there was a very bright side to the visit. Leah and her cadre of mischievous engineers were doing all the things we had done: Going to programming contests, returning with trophies, spending free time in the computer labs, socializing in the labs, working in the labs, falling in love in the labs, hacking campus computers (Leah did it as part of a report on computer security, and the dean had to intervene to keep her out of trouble!), trying to interface computer software with robots, and writing computer games. They were exploring their medium.

I had to ask "so, you're not trying to invent the next killer web app?!" Leah cocked her head skeptically, frowned, and pointed out the window...at the Business building.

Of course, business thrives on both technical and business innovation. I see amazon.com as originating from business innovation. Put the whole bookstore (and quite a few other stores) right in front of people, give them a way to rate products for each other (and appeal to their ego at the same time), and tell them about products that they may be interested in (with an all-too-easy one-click purchase option).

It's like a mall crossed with Consumer Reports crossed with a Personal Shopper. Amazon.com takes far too much of my money from me each year, but I get these little packages of joy delivered to my door, even when it's not Christmastime! It's brilliant.

Now amazon.com has made much of its sales engine available to developers via their web-services API. They're using a technical innovation, and that's paying well, too.

If we consider the original web search algorithm, Google was a technical (mathematical, algorithmic, scientific) innovation. I recall wondering how they were going to turn that into a business success...until they came out with those short, text-only, search-related advertisements. That was a clever business innovation, later measured as the most effective use of advertising dollars on the internet.

I knew that Leah's reference to the Business building was her way of doing her part to keep the CSE vs. CIS rivalry alive, and I was encouraged by that. We need both forms of innovation, and keeping them somewhat separated is probably beneficial.

I wonder how many companies have failed because they refused to launch until they had the market all tied up in a neat little ball? (Remind me to tell you the sad story of Cymerc.com. They relied on Cysive to build the product, and Cysive was not agile. And now they're both dead.)

Some companies (particularly start-ups) rely mostly on one or the other form of innovation, but most midsized or larger companies these days need to consider how to stimulate both.

The unbounded, un-purposed exploration that's again happening in my alma mater is a key ingredient to innovation. Whether or not some great invention will appear from the halls of our Universities; this is not my concern. But software development teams need an environment that is similarly conducive to exploration, and perhaps tolerant of a touch of mischief. The mindset of exploration is the driver of innovation, and cannot be forced or coerced, even with bags of money.

I dearly miss Flagstaff, the NAU campus, daily interaction with those friends, and that feeling of exploration. Yet I left the reunion with a happy heart: Software innovation is not dead!
Posted by Rob Myers at 4:43 PM